The Secret Of The Spearhead

A few days in on my vigil with the Brighid Flame, I journeyed to the Goddess herself and got given a very heavy iron spearhead painted yellow. The weight of which I can still feel in my hand. It fitted with her being a metal worker and forging such things, but what puzzled me though were two holes in the head either side of the shaft end in the two downward points away form the spear point itself. I googled and searched old Celtic spears, any spears, then wondered if it was a harpoon head ... but nothing.

Then on the final day of the vigil sat with some special SiStars, one of them saw it ... hung point downward from a torque. It made sense and I could feel it hung there as she described it to me. Another SiStar concurred the same seeing.

Earlier today I gained a little more insight into my rather heavy neckpiece. Just doing my general reading, not research, in wonderful book called Voices of the Goddess by Caitlin Matthews I found out that another goddess, who like Brighid is a solar goddess, has arrows as her her symbol. She fires these arrows into the heart. This symbolises a ray of the sun, a shard of fire that penetrates and warms the heart, connecting the soul with the solar fire. It was then that it twigged how much I had missed the point of Brighid being a solar Goddess, even though I had sat and made a St Brigit's Cross out of golden, yellow straw, a sunwheel long before it became a Christian symbol. I knew she was a solar goddess, with her sacred flame, but until that light bulb moment I didn't realise how I hadn't allowed that to knowledge to penetrate deep enough. I work mostly with the Moon and the Earth. I acknowledge and honour the solar cycles and work with the energy of the seasons, but do I work with the Sun enough ... perhaps not ... hmmmmm ... and I had been given a shard of the sun in the shape of spearhead to work with, to help me.

So I journeyed with my heavy yellow spearhead hanging down over my heart, the tip at my solar plexus. At first it started like a warm glow in my heart, then heat, like fire radiated down my spine all the way to the earth below and all the way up to the top of my head until fire was pouring out of my hands, my shoulders, my eyeballs, my forehead and my crown even the tops of my feet were aflame. Then the ground underneath me turned into a swirling vortex of charred earth out of which a great, black snake rose and uncoiled with a long red tongue licking upwards. That snake kept rising up through me until it came out of the top of my head. I am slightly lost for words to describe the feeling and the vision at that point ... but eventually the serpent slunk back down to the earth beneath, the flames subsided and were finally extinguished leaving just a wonderful internal glow.

I sat there for time afterwards, truly bathing in the after effect of the Sun's almighty fire and contemplating the imagery of the great serpent, the Kundalini and a deeper knowing of the earth-dragon of Delphi, the python, and the Pythia, those oracle priestesses, who gave words to their vision whilst sitting over the vapours of the hot rocks, the fiery earth, below. I gave thought to the fires of transformation and my own internal alchemy.

Back to the mundane world and I found myself phoning my internet company as my connection had completely gone down. They put me on hold for a minute and whilst they did so they played me The Girls Is On Fire by Alicia Keys ...

Then I finally get my internet back and on my Facebook news feed from this afternoon are the following two images. This first one is by Mukesh Singh ... an earth priestess and the core of the earth. 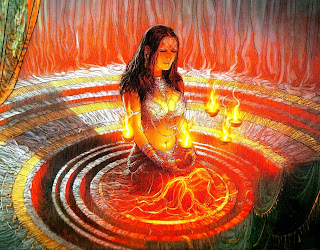 This one has only been finished by the artist this week ... Priestess of the Fire Tribe by Martin Bridge 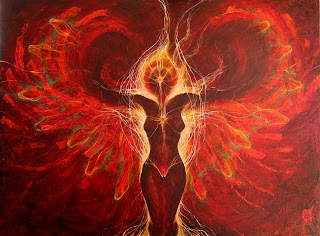 I'm quite wowed by both of these incredible pieces, notice the flaming snakes in the wings of fire ... and just in case that wasn't enough here is Martin Bridge's poem to go with his extremely powerful painting.

I stand, cloaked in Shadow, touched by Fire and Torch-light , in Her place.
Her breath is carried upon the wind through my song
Her wisdom is carried through my lips through story and poetry
Her burning passion is summoned by the drumbeat
Her song is carried by means that transcend human language
I flow with Her as she moves through me
The dance She inspired between moon and earth is echoed in my body.
I mimic Her Service to the beings she sustains through the offering of care, sustenance and love.
I am Her instrument in service to the tribe.
The ancestors live within me, locked within the serpent’s coils that dwell in my blood.
The stars inspire and lead me.
The fire of the sun burns within my heart.
I live to honor and serve Her
I am Her incarnation upon this earth

I am a Priestess of the Fire tribe.”

Thank you Universe, thank you Goddess Brighid, thank you great artists of music, paint and poetry, and thank you dear Elaine for all bringing me to such realisation and for giving me such an inspiring, fiery, sun filled day. I will wear my spearhead often and one day I will commission a metal worker to make me my Priestess of Brighid torque for real ... but till then I promise to tend the flames more.

The Dreadess xx
Posted by Heidi Wyldewood at 18:24

Promote your Page too

Kicking Up My Heels On Metamorphosis Road

CURRENT MOON
about the moon